Wow its been two years since i wrote anything here. Not that i ran out of things to say really but i just lost the enthusiasm to share random stuff. The world kinda went to shit after that pandemic. We stayed indoors for the most part and there were positive things though that came out from that situation. For one i realized how much I could’ve saved if I had just bought my own treadmill and stationary bike. Those are the only equipment I usually use at the gym. The weights and other gym stuff are usually hogged by patrons . So this works out.  Now that we have our own machine it doesn’t matter if the weather sucks, there is no excuse to miss a workout. Best part I can watch my favourite shows any time of the day and still exercise. Anyway I’m kinda looking forward to posting more stories soon. Two year went by so quickly . I miss thumper and since she passed we adopted a few more . Will be posting photos of them soon and sharing their stories :)

Written by runningtindera on Tuesday, October 26, 2021 No comments:

I wrote this entry on July and never got back to it. cant believe how quickly that week went by that I thought I’d have time to write more about Thumper's progress. She was lethargic the past couple of days and one evening she was trying to get our attention and we noticed something leaking from behind her. My heart stopped and I thought it was something serious and could hasten her already deteriorating condition. We brought her to the vet the next day and it turned out she has an anal gland rupture. I was actually shocked . I’ve had cats for many years and I’ve never heard of this. The good news is she didn’t need surgery. It will just require for a daily antibiotics and cleaning the wound with antibacterial wipes. She was a good sport and such a behaved patient. The vet and the staff always say she is a very behaved cat.

In just a few weeks though things took a turn for the worse. The cancer has spread very quickly and it was so bad that when we brought her to the vet again, she only had probably a day to live before she would suffocate because her lungs were full of tumors. It is was a horrible day for us and we had to make a drastic decision.

We lost Thumper on August 3 2019 and a part of me died that day. She was a special part of our lives that I am not the same person without her. I cannot even talk about her without breaking down. I cannot look at our selfies together without feeling crippled with that gnawing pain. She died on a Saturday and I had to go back to work the workday after that weekend. looking back i cannot even remember how i managed to get through that day.  Just the same, Im partly relieved knowing she is no longer suffering. She gave us more than 10 good years and for that I am grateful. Some people may not even have had that rare kind of happiness and I had a decade of it.

When Im ready I would like to talk about her more but today I just want to tell the world how blessed I was to have had that chance to share our life with this wonderful angel. I love you so much Thumper! We miss you baby girl and one day we will see you again. Please wait for me by the rainbow bridge.  Sleep peacefully my baby girl.

Daily thoughts - Getting back after a 4 year hiatus

It has been a few years since i shared my adventures and thoughts online. The irony of life is when you got a lot to talk about, you just dont have the time to do it. on the other hand, when you got plenty of time, there's just not much going on.

what prompted me to blog again? a major event made me step back and reassess my life. i want to remember this moment.  Some people blog to make money.  I would like to be able to read about my thoughts again in the future, many years from now and reminisce and be nostalgic and grateful even. a diary is great of course. ive been writing in journals since 1992 and i still do, but having something online is simple and easy to pcheck instantly. a few days ago  i was going through an old blog post i wrote 10 years ago and realized i had so much adventures in the past that and enjoyed writing about it. why did i even stop.

I moved to NYC  Thanksgiving of 2011. it has been almost 8 years and 4 apartments later.I had an awful first job. Found another one that was ok but short lived because the company moved to another state. Became unemployed for 10 months, lived off government cheese for awhile while i looked for a job.  trained for a marathon too while waited for that elusive employment to open up. eventually found another job at the start of 2015 been there for 4 years, training again for another marathon (s), feeling an imminent unemployment but hoping not yet soon. took some art classes with one of my instagram heroes as my instructor.  rode a bike around nyc for 40miles without training lol.  in a nutshell, it was a great 8 years so far.

in retrospect i wish i wrote down all those fun and challenging experiences on my blog. but yeah sadly like i said life caught up with me and i just did not have the time to share it.
going back to what was it that made me want to blog again. it wasnt just the excitement of all the things i learned and want to do, but the heartbreaking realization that one of my cats doesnt have enough time left.  Thumper, my 10 year old little sunshine is dying. last year around March, they diagnosed her as having an aggressive form of cancer and she was given 3 months to live.  Her veterinary doctor initially recommended skipping surgery but later on decided to give it a go. We took a risk that paid off.  They resected a tumor that grew on her mammary gland and it has been over a year and she survived. Unfortunately you know how cancers are. the fucking tumor is back and its now the size of half of a golf ball. i wanted it removed again but the vet doesnt see the point of it. also it is very dangerous now since the surgery might kill her. So what are our options?  Not much really but to literally wait.  It is sad to think of it but im not giving up yet until  its really over. When i was in medical school, we were taught that the most important thing you can do for your patient is not simply to treat them because sometimes you just cannot make them well again.  However, you can can improve their quality of life. that is exactly what i plan to do. give  her my best like i always have.

Thumper is loved. She always has been since we adopted her home from a loving family in Singapore in  February 18 2009. We have tried our best in every situation to always do what is best for her and Dapper and our other cats.  Some people are fascinated and also shocked to know that we brought our cats from from Singapore to the Philippines and eventually to NYC. We do not have a lot of money but we have a lot of love especially for our pets. My IG account is filled with photos of her and her sister Dapper and the more recent addition to our little family Cheesecake.
Although this platform is mainly to serve as my online journal for myself, i wish to share it in case someone out there is going through something similar. but for the most part, im dedicating this to Thumpy, my brave little girl who has taught me so much about life and love. I hope you enjoy this journey ill be sharing weekly about her and other things i may want to talk about. 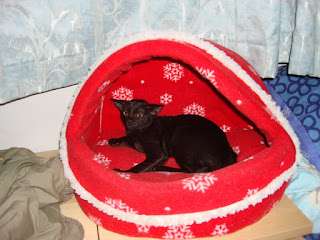 Written by runningtindera on Saturday, June 29, 2019 No comments: