I picked up Enchong the following day after his surgery last July 21. He was meowing loudly and the vets in duty told me that he was quiet until he heard me when I walked in. I was glad he seem okay. He had to be fasted for the surgery so I bought a meowmix wetfood for him to appease his hunger


The trip back home was interesting as usual. If you have a carrier and a freaked out cat inside, its guaranteed you will get attention. A bunch of street kids helped me board a jeepney. One of the kids heard the crying cat and he called out the rest of his friends and they were all so amused and happy! They got on the jeepney to pull the stroller in. It was very sweet of them. The driver on the other hand was a real jerk and kept yelling at the kids to get off his vehicle. Rotten man.

It was hot and the damn driver dropped all of us off at a very uncomfortable distance away from the usual spot where passengers are unloaded. Lazy asshole. The walk to the tricycle stand was probably 10 minutes and it didnt help that it was unbearably hot. I felt so sorry for the poor cat. I pulled the stroller with the hysterical and furious Enchong in his carrier. Almost everyone within earshot stopped to look at the carrier and would exclaim PUSA, IMPORTED! hahaha much to my amusement.

When I got home I let Enchong out and wiped him with some wet ones before letting him back in the room.


He is doing very okay now. I have to give him some antibiotics every night, which he hates by the way, but other than that, he is doing well.He still chases the female cats around. I asked the vet if this was normal. He said, although the urge may no longer be as strong as before, castrated male cats have that memory imprinted in their minds that they may still want to chase female cats and even try to bone. Interesting. I now have peace of mind when I leave Enchong with my 3 female cats.

Now my next plan is to get the two female cats that belong to my family, spayed. Pepper just gave birth to 5 kittens can you believe that? She is indeed a kitten factory. She has 2 grown up kids, Squid and Maki, Enchong, 3 "adolescent" kittens Gibor, Dalja and C2 and now 5 more kittens. Pretty had 1 kitten I named fruitcake.


Pepper and her many many kittens.. 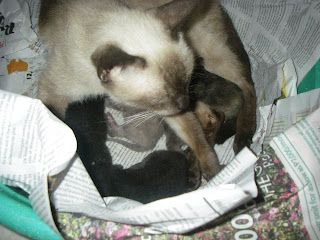 I love cats but I dont love the idea that no one will take care of them when I leave soon...
Written by runningtindera on Friday, July 29, 2011 No comments:

A few months ago I caught Enchong trying to bone (my apologies for lack of a better word) Thumper. In the weeks following that incident, I would catch Enchong trying to pull the same stunt on Boomer. It has gotten out of hand that sometimes Id be sleeping and Id hear Enchong's grunting sound and a squeal from Boomer.

I decided that Enchong had to be temporarily banished from the room until it was "safe" for everyone (all female cats except Dapper coz she is fixed). I dont want another pregnant (with busted eyeballs) cat (there are already 17 in the house) to add to my problems.

I have been planning to take Enchong to the vet for weeks but the rain and my problematic sleeping patterns have made it very difficult for me to follow through. Finally last Thursday July 21, I managed to call the vet and arrange for my cat's castration.


It wasnt hard to catch Enchong and throw him in the carrier. Normally him and the other cats would be hanging out by the door of my room when I would come out. For obvious reasons, they think im the Santa Claus of catfood.

I fed the cats before leaving with Enchong in tow. I also dropped by at my brother's store to have lunch. The cat at the store inspected the carrier to see Enchong off.


After eating lunch, I took the screaming Enchong to the tricycle stand and we headed for town. The trip lasted for 8-10 minutes and it was obvious my cat was very agitated. Its his first time to be out of the house and aboard a noisy tricycle. I pulled the stroller and went to the bank to draw out some money. People who saw the carrier curiously peered through it and kept asking me if the cat was imported. Yeah I said, we imported the cat from the streets. hehe then some looked disappointed. Funny because Enchong is actually half siamese and is not a stray cat. But anyway its just amusing that people lose interest when they are told the cat is a puspin - pusang pinoy (stray cat or pusakal). They assume the cat is nothing special if its not pedigreed or "imported".

IMO, My Enchong is not an ordinary cat. He is the sweetest cat in my room and he looooves me.Sometimes he does act obsessed though.

I put that stroller to good use! It would have been a nightmare lugging the cat carrier with a distressed cat inside. Enchong was furious! He was meowing loudly and protesting. To add to his discomfort, it was very hot outside.

Fortunately there was an FX parked where commuters regularly wait for rides. I also ran into a neighbor while I was trying to board the bulky carrier on the FX vehicle. He helped pull the stroller up the back of the car.  We chatted for a bit during the trip talking about cats and pets. I got off at Tikling. The travel time to the Bethlehem clinic took only 10 minutes.

Honestly, I was a little hesitant to have Enchong's balls whacked off. But I know this is a favor Im doing for him and not just for my female cats. I want him to live a longer and healthier life. I must admit though that I was so worried of having to leave him overnight at the vet and the surgery going awry or something..


I didnt stick around too long. I was there to drop off Enchong for his scheduled surgery and also to get supplies for the rat babies. So I bid my baby boy good bye amid his incessant cries. I stopped to also get some nice tasting yet cheap ensaymadas by the store beside the vet clinic. Too bad I wasnt able to take any photos. Next time maybe.

The trip back to town didnt take long either. Some passengers on the jeep were kind enough to also help pull the huge sack of catfood aboard the vehicle. When I got off at town I lugged my bag of cat treats to the tricycle stand. I also bought 4kilos or rice for myself and the dogs. Our dogs dont like dog kibbles too much. They prefer my own rice mix (ie left over and fresh cooked rice).


When the animals heard the tricycle stop in front of the house, they were all in a frenzy. The dogs were barking, the tiny cats from my brother's house wormed their way out of the small windows to welcome me home.


Critters were happy (as always) to see me. If these cats could open the door for me, they probably would. They were all over my legs brushing their bodies, hoping to get a taste of whats inside the bag of goodies i just dragged in the house. I had to make them wait though. I cant open the bag without any ready containers otherwise, ants will be all over it in just minutes.

I had to bring the sack of food in the room first and put them in air tight containers. But before that, there was another batch of welcoming committee waiting for me.


It was taxing to move 7kilos of kibbles to several smaller boxes and jars but that put my ant worries to rest.


The small containers I had werent enough so I had to put away the rest of the kibbles by enclosing the bag with two plastic garbagebags and using two "clippy-dos" you get from ikea to seal it. Then finally stashing it in an empty rice box.
Now that task is out of the way, I had to go out of the room again to feed the cats. I didnt have to be reminded, because the moment I walked in the house, they havent stopped meowing. 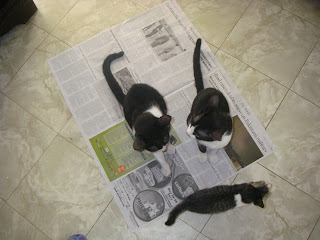 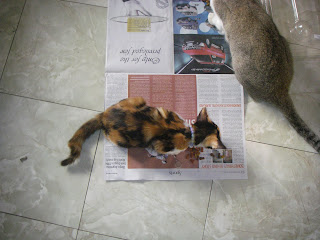 The cats have some makeshift bowls but the way they looked that time, they would gladly eat out of anything. So I just grabbed some newspapers and fed them anyway.

The dogs had Rice Mix.

Seems everyone was happy today except for poor Enchong. Bye bye balls..