points to ponder on

I embrace hard times. It is the stuff good stories are made of. It makes you appreciate what you have now because of the difficult moments. It gives you the sense of pride that you have been there and you know that nothing can faze you.
Written by kahel kuting on Sunday, August 08, 2010 No comments:

I have had cats for as long as I can remember. My dad brought 2 kittens one day and one of them lived for 13 years before passing away. I dont remember what happened to the other one though but I know that their names were Cheche and Mingming. Mingming was the first cat that died in my arms.
I have had many other cats over the years. I cant keep track of all their names anymore but I still find photos of them in some of our albums.
Even with our limited money and resources, my parents did their best to send all of us to good schools and consented to us to having pets. While I was growing up, the idea of catfood or kibbles and kitty litter were alien to me. Catfood was rice and some left over chicken, meat or fish. Kitty litter was just newspaper. Our pets didnt seem to mind. They looked healthy and most of them lived for a decade at the least.
On all stages of my life I had a cat or cats.

When I went to Medical school, I adopted a cat I found in front of the hospital. His name was Orange. I had him for a few months until one fateful night he was accidentally ran over by a classmate of mine. It was tragic and I was upset over it for months.
When I left Medical school, I had another cat named Jake. I had him for 3 years until an asshole school bus driver ran over him right in front of our house.
Our neighborhood is no longer accessible as a detour for cars going to the school nearby. But this was not the case a few years back. It was an unfortunate incident and ever since that experience, I have been overprotective of every cat I take in. I was able to get over Jake only because my brother's then girlfriend (now his wife) gave me a new kitten as a gift. The name of that cat was Fishy.
Sad to say Fishy also passed away after 3 years. He got sick right after I moved to Singapore. My family told me that he would hang out in front of my room like he was waiting for me to come out. They said he wouldnt eat for days and would meow nonstop until he got tired. His behavior became disturbing when he camped out of my room for weeks then he would also take a dump in front of the door. He later on probably realized I was not coming back. The odd behaviour persisted thought nd Fishy had to be put in a cage. After 6 months, I came home for a visit. It was shocking to see Fishy look like he was gonna die anytime.
I went back to my hometown for a visit again 3 months after that. Fishy seemed to have gotten worse. Shortly after I returned to Singapore, I found out that Fishy died. He didnt get killed like my other favorite cats. But I think the loneliness was just unbearable for him. I never thought that cats can suffer from a separation anxiety great enough to make them sick. Fishy succumbed to that.
I felt terribly sad. I thought of getting a cat in Singapore. My husband and I decided to get a cat last June in 2008. The only problem was that it was a get one take one deal. The cats were siblings and it was an arrangement by the caregiver that we can only adopt the kitten if we were willing to take in the other one too. One cat was gimpy, whereas the other one was normal.
So we took in both of them. Unfortunately after a month, we realized that we could not afford to care for the disabled cat. It was too much work and since we cannot be around all day, we had to make the painful decision to return Whitty to the caregiver. It was a tearful day when we parted with our first Singaporean cat Whitty. She was originally the cat we were supposed to adopt. Dapper was only the bonus cat. Later on we noticed that Dapper seemed lonely so we took in another cat from a shelter and named her Bouncy.
We had two cats right until December of 2009. Then we adopted another cat named Timmy. The new cat instantly became our favorite. He was just beautiful and very sweet. Even our cat Dapper got along with him right away. 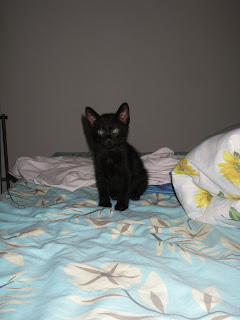 Timmy
We had Timmy for a few months when he suddenly went missing on the eve of the Chinese New Year. It was tragic. Me and my husband wept all night and the entire week over it. To make matters worse, our other cat Bouncy had an accident and died a few days after Timmy disappeared. The pain was unbearable.
We had one cat left, Dapper. She too seemed lonely when both of her companions disappeared. She was quiet most of the time and just slept on her red bed. She was also looking around the bathroom, the cabinet and under the bed. I think she was wondering where her friends went to. 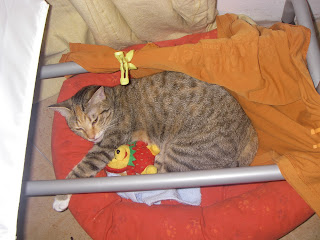 I know it sounds kind of selfish everytime I do it but since I could not get over Timmy nor Bouncy, I thought of getting another cat. I thought it was not just a way for us to fill that void, but we thought Dapper could use some help in that department too. We looked online on information about kittens for adoption. We were unlucky at first. Everytime we did find one, we later learnt from the owner that someone has already adopted it. We wanted a black cat who looked just like Timmy.
Then we stumbled on this youtube video:

After a busy day at work on February 17 2009, my husband and I went to Bedok to pick up our new kitten. The owner had no name for her because she didnt want to be attached to the kittens that she had put up for adoption. She was just called Cat 3.


We named her Thumper because she hops like a rabbit.

A few months ago, before we decided to move back to my hometown, we adopted another cat named Marble. All in all we have 3 cats now that we have relocated to the Philippines.

Dapper is going to be 3 years old by March next year and Thumper will celebrate her 2nd birthday on December of this year. We are still estimating how old Marble is but she was probably roughly 8 months when we adopted her last March.

Taking care of all my cats is not easy. Also it is sometimes costly. A kilo of their food is more expensive than a kilo of rice. I have to buy kitty litter every 9 days and it costs like 7SGD or 224PHP. The litter box has to be constantly scooped every few hours. The cats also get baths every 2 months and their shampoo is not cheap either. I cant even begin with how much money we have spent on their vet bills.

When we had to move our 3 Singaporean cats here, we had their paper work processed. They needed also their shots, permits and plane ticket. It was expensive! The preparation was tedious. It was nerve wracking especially when Marble escaped at the Changi Airport during boarding.

The hardest part of owning a cat though is when one dies on you. Sometimes I hear people say its just a cat that its ridiculous to really grieve over an animal. But only those who have pets can truly understand our plight.

So why do I want cats when things would have seem simpler without them? Because this is the aspect of my life where being simple is not great. Cats provide me the kind of companionship that I know is essential for my survival. They are my stressballs although we dont talk. They make me laugh even though they cannot crack a joke. Their sheer innocence and fun disposition keeps me in touch with the child in me. They share my sentiment when it comes to apathy for branded clothes, shoes, bags or other material things. Their carefree attitude teach me that I should enjoy life more and not worry myself to death over what may happen tomorrow.They are delightful to be around with and they are not pretentious. In fact sometimes I would prefer their company than to be around boisterous, obnoxious people. They are independent yet they long for attention every now and then.
And when some people tell me why I like cats so much when cats are supposedly dirty and smelly. I dont shrug my shoulder and tell them I dont know. Because I cannot find a reason why I cannot like them. And they are not normally dirty nor smelly. They just need a little help from us for their monthly grooming. Other than that, cats are fastidious animals. 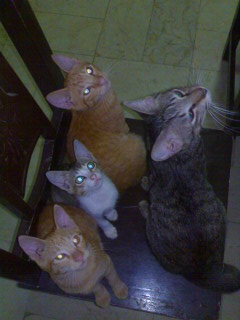 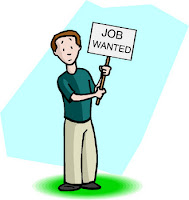 Bum days have come to an end and Im gonna start working on Monday next week. The whole application process was a real nightmare. You really have to allot one entire day to wait, wait and wait. But Im happy that finally I can be productive once again.

Right now Im really exhausted so I have to put off sharing that job application experience some other day.

The day was interesting though. We also got a goodie bag from the employers and it had a pen, a little notebook and a water bottle. The contract signing is tomorrow. Maybe it was a bribe so we wont change our mind? hahaha
Yey! Time to start working and eventually earning again!

I hope I dont end up getting a job that sucks though, like this dude below:

Written by kahel kuting on Wednesday, August 04, 2010 No comments:

points to ponder on

Ive learned that sometimes you have to be selfish and its called self preservation. I learned it the hard way.
Written by kahel kuting on Monday, August 02, 2010 No comments:

This day commemorates the one year anniversary of the passing of our beloved President Corazon Cojuangco Aquino or fondly remembered by everyone as Tita Cory. She has left an indelible legacy in our history by leading the peaceful revolution in 1986 that ended a 20 year long dictatorship rule in our country.

It has been 24 years but we have not forgotten:

The image below shows how our nation mourned the loss of one of the most important, influential and selfless leaders of all time. The photo of her funeral paints a thousand words. It also seem not too different from the photo above which happened 24 years ago. The whole nation together with a common goal. In 1986 it was fighting for and eventually winning our freedom. A year ago it was to show our gratitude for that freedom.


We celebrate your life President Cory. Thank you for leading the Filipinos in regaining what is rightfully ours. You will always be remembered. 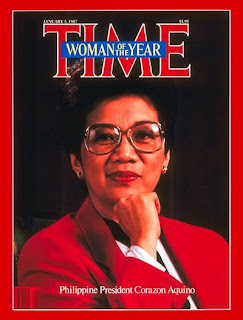 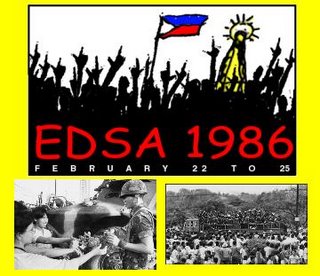