i finally got around to start sketching again. i found a neat can of faber castell watercolor pencils on sale at the activity center at the mall. i love the new pencils. I tried it with some of my derwent sketch pencils and i tried using the watercolor brush too.
here are a some of tonight's sketches: 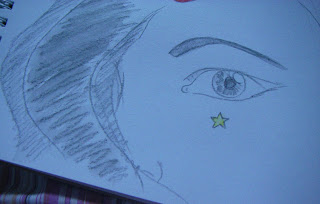 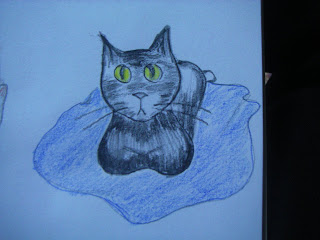 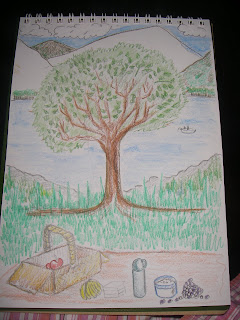 I came home yesterday bushed from the usual routine at work. I made a quick dinner for me and my hubby. We usually have our meals on a tray table in front of our long desk because we'd watch a movie while we gobble our food. I kinda lost my appetite yesterday though. I read on the yahoo page that Brittany Murphy had a heart attack and died at the age of 32.

I couldnt believe it. It was shocking and very sad. While some people were dissecting her life and speculating about the cause of her death, I sat and wondered what happened too. Mostly I just felt a huge loss. I am one of her biggest fans and no it didn't start with the movie Clueless. I saw that movie for the sheer curiosity that it was a hit and of course to see Alicia Silverstone. 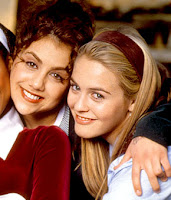 Brittany Murphy transformed from a chubby homely girl to a svelte, hot IT girl over the years. I even think she surpassed the fame of her pretty costar in Clueless.

Im kinda surprised though that there were rumors of her battling an eating disorder and being addicted to pain relievers. They say she had plastic surgery but I dont really know. Tabloids arent usually reliable. Most are just good for wiping your ass. However I do admit she has become creepy-thin lately.

Most of her movies are among my favorites. I seldom watch chick flicks and I am not really crazy about Love Stories, but I did like her in Clueless, Just Married and Little Black Book. In fact Ive been trying to look for that clip where she was singing a Carly Simon Song while she was laying on the bathroom floor. I never found it though.

I loved it when she sang Nobody does it Better in that film. I also liked her singing in Happy Feet.

The first film where I really fell in love with her was the movie Girl Interrupted. Again, she was not the reason I went to see that movie. I read the book and I also fancy Winona Ryder and felt compelled to watch it. That film had a bunch of gorgeous nutheads running around you know.

Her stint was short but she caught my attention. I dont think the big stars like Angelina Jolie or Winona Ryder outshined her. Although we all know who took home the bacon on the Academy Awards, I still think she made her mark in that film. That song in the movie, when she was found in the bathroom, still haunts me..and I think it forever will.

Brittany Murphy's death is probably front page news everywhere. This morning I came across a local paper where it blatantly read: "SHOCKING DEATH OF BRITTANY MURPHY DUE TO DRUG OVERDOSE?". Yeah, there was a question mark but it really didn't sit well with me. I just think it is unfair to jump to conclusions too soon without the results of the autopsy out yet. But what can I expect, she is a celebrity. As one close confidante told me, people are like that. They would do everything they can to ride her fame one last time.

The people writing those articles don't care how her family, friends or fans would feel. Opportunistic assholes I may say but maybe these writers are just doing their job.

Besides, its all part of the package of being a celebrity. I think people talk more about celebrities when they're dead than when they were alive. Also, tragic and untimely deaths of young celebrities sometimes even spawn a cult like following. I don't know really why but maybe its because of the mystery? We put these people on a pedestal and when they die like that, it leaves us with a certain insatiable eagerness to know why. We just want to know more about them. Especially for those who are at the height of their career and suddenly die. For example, take James Dean. He didnt have a lot of films. But after he died, he became more popular. In fact he is an icon and has left an indelible name in history. 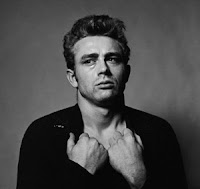 I was enchanted with Brittany's beautiful voice in Happy Feet and that hit Faster Kill Pussycat with Paul Oakenfold.

Her versatility in acting is impressive too.

It wont be long before the cause of her death is disclosed publicly. It does not really matter to me. I will continue to admire her. For me she was a talented and beautiful girl who just left this world too soon.

I celebrate her life although I still mourn her death.

Ran for 30 minutes only today. Nothing special except it was at 1130 pm. Yeah I finished at midnight and walked for 10minutes to cool down. Every 10 minutes made me feel like I was gonna pass out. Well this week was somewhat taxing since Im just adjusting to joggiging again. Hopefully I can increase my mileage by next week. For this week its mostly 5k per day and of course that one hour walk from Tampines to Pasir Ris yesterday. 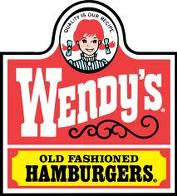 I HATE THE NAME BUT I LOVE THEIR FOOD!!
cant wait for it to open!!
Written by kahel kuting on Sunday, December 13, 2009 No comments:

thought for the day -now or never

the first step is always the hardest. this applies whether it is quitting a vice, putting down that jelly donut or going out the door to walk or run. Its now or never.
Written by kahel kuting on Tuesday, December 08, 2009 No comments:

where there is pain, i find serenity and personal gain 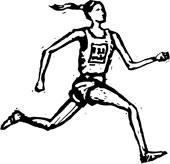 It has been almost a year since I last ran. In between those months that elapsed, I did some short runs and swore I would do it on a regular basis. Sad to say all those plans didnt materialize. I feel embarrassed to admit that I got really lazy and complacent. One month of putting off my run, turned into a year. With the additional unnecessary weight, I am back to square one. I cant believe in fact that I have turned my back on one of the things that truly makes me happy and fulfilled. Over the years I have turned to running when I encountered something major in my life. Breakups, career disappointments, failed exams. I would go running and feel a huge burden lifted off my shoulders. It was my sanctuary, my escape. After a run, I feel I can go back and face the world with a more refreshed outlook and confidence. I wonder why I even stopped.

On top of ditching running, I have also gone back to a bad and disgusting vice. No exercise coupled with bad habits make it all the more hard for me. Going back to running is not as easy as it seems to be. Im older, not as limber and my lungs seem to hate me for all the abuse i put it through.

I am slowly taking baby steps to resume running. It has been 4 months since Ive quit my nicotine cravings and been running for a week but I really feel great already.

This will be the first among the many note entries I will be making as I embark on a quite lofty goal. I will be going back to doing one of my sacred passions. It will not be easy at all but I am proud that I have taken the initiative and decision not to give up this time.